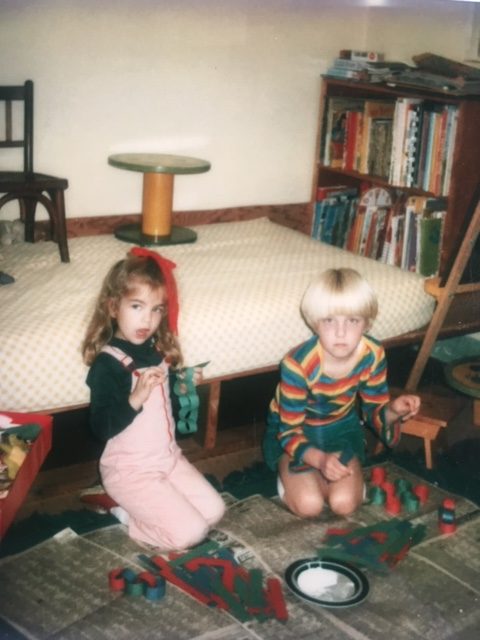 I was a weird kid in disguise. That combination — the disguise and the weirdness equally — defines my whole story. I can’t ever pretend I’ve known the suffering of being blatantly, overtly the persecuted or odd kid out. I had incredible privilege, being able to pass under the radar as much as I did. As twisted as the inside was, I had three golden keys in our culture: I was a straight white girl, pretty enough, and didn’t have a weight problem. (I was freakishly tall by about five … a backhanded bonus.) I also got by in the world because I could read every room well without knowing I was doing it. And in my world it mattered a lot to please the room.

I had an instinctive connection to non-humans too. Sure, I loved my pets like any kid, but I also communed with less popular life forms. I collected rocks, talked with flower buds as I peeled their layers to reach their true personalities, and assembled snails in families on the front porch. Attuned to even more abstract relationships, I knew every number and alphabet letter by its gender and character traits (recognizing which ones were gender-fluid too). I saw faces in hedges and heard trees tell me their soul age. I talked to and through dolls.

And I listened hard to the strangers’ voices pronouncing my thoughts that didn’t come from me. Sometimes they yelled all at once, and I’d dance as fast as I could back into my disguise. Perfection was valuable armor, and I followed its lead for years and years.

All of this passed under the radar of every single person I encountered … at least as far as I knew. My parents and sister, the two grandmas and a grandfather who took care of me, countless other close relatives, teachers, friends.

But recently I went to lunch with my favorite Spanish teacher from Middle School, decades since I’d sat in her classroom (I was privileged with the kind of teachers I had too), and she said in the gravelly Argentinian accent I loved, “Oh, Amanda. You always were very in-tune. You were on a different plain and … I knew … very wise for your age.” I’m not sure if she knew what a balm she was offering this much later. What it quenched to hear I might have been wrong about my true self being invisible and its most distinct nature being unnecessary.

If I was wrong then, why couldn’t anyone tell me so before everything fell apart and I had to find out for myself from a dark abyss? In other cultures, in other centuries, word might have been passed to a wise elder about the invisible people’s voices I’d mentioned to my parents. Rather than ushering me into a kindergarten seat, I might have been led to kneel in a temple or at the base of a tree.

Instead I lived a girl-next-door life, and the playground — and later the lecture hall, the shopping mall, the city train, the bar stool, the high rise — became my spiritual learning ground. And now those are the places I serve, as reluctant as their denizens might be to hear my truths.

Are you longing for your own somewhere better than where you come from? Whether you struggle to fit in or you mightily dig in where you are, you might be surprised who sees — and values — your truth.

2 thoughts on “Weird girl next door”